Thoughts & Musings from the Pastor's Desk 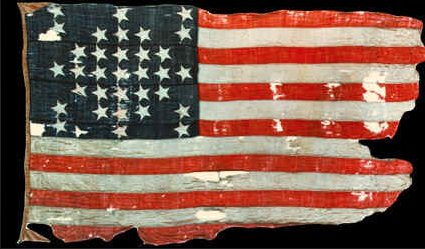 I am a Southern man. I was born in Missouri, subject of the Missouri Compromise of 1820, an early harbinger of the Civil War. But early in my life, my family moved to Virginia. Eventually, I would also live in North Carolina, South Carolina, Texas, and, for the last quarter of a century, Alabama. In other words, I have lived in five of the states that seceded from the Union. I currently live in a city where Union troops razed churches to improve their field of fire from their headquarters at the local bank. I love Southern traditions, Southern food, Southern music, Southern authors, Southern accents, Southern humidity, and Southern winters. I know the name of Robert E. Lee’s horse, and I know what the “E” stands for. And I know how “Stonewall” got his name. I love my Southern heritage. Except the parts of it I don’t love.

Before I am a Southerner, I am an American. I love my country. I have repeatedly pledged my allegiance to its flag and to the republic for which it stands. I believe the Declaration of Independence still embodies our most worthy national aspirations and the Constitution provides the most brilliant form of government known to man. I believe the Bill of Rights is political genius. And like any true patriot, I am grieved by our national fractures.

Before I am an American, I am a Christian. I follow the Lord Jesus Christ and I believe that Scripture alone is the final authority in all matters of faith and practice. I believe in the relevancy of Scripture. I believe Scriptural principles speak to every issue of our day, including what to do with Confederate monuments. Because I am a Christian, I believe that the central tenets undergirding the white supremacy movement, the KKK, and Nazism are damned lies.

So I am conflicted. I am a conflicted, white, Southern, Christian man who loves his country. It breaks my heart that statues of white, Southern men are at the center of so much anger, hate, and hurtful controversy. And I have a suggestion for people on both sides of this issue.

Before you weigh in on Confederate monuments, consider these three questions.

First, have you read any serious, non-fiction history of the United States in the last ten years? Anyone who thinks the causes and consequences of the Civil War have simple explanations doesn’t really understand the Civil War. This national tragedy happened in a particular historical context. It took a war to settle the questions that the Founders left unresolved. It’s a complicated task that cannot be reduced to smug sound bites or clever tweets. No subject in American history has captured more attention of historians and political scholars than the Civil War.

In the end, not much history is learned from monuments. Monuments can serve as a catalyst for the intellectually curious, but a few lines on a pedestal won’t cut it. It is better, I think, to turn off the shrill, angry voices of cable news and spend a few quiet evenings exercising deep-thinking skills with a good book. If you don’t know where to start, I suggest a few books that have helped me gain the bigger picture and discover some of the crucial nuances of this emotional debate. You are welcome to come by my office and borrow any of these if you are willing to leave a sizable deposit!

Taken together, books like these, with some diverse perspectives, can provide the historical context that is necessary for honest analysis. If you have not read any of these books, or something comparable, in the last ten years, it is possible your understanding of the Civil War is deficient.

Second, what Civil War battlefields have you visited? For people who love monuments, this is heaven on earth. When you mix reading about the Civil War with seeing and smelling the dirt where thousands of men lost their limbs to Minni balls and bled out their lives, you may sense some of the somber awfulness of this war. Go to Gettysburg in July and imagine digging trenches on Seminary Ridge in sweltering heat on an empty stomach, knowing you are in a fight for your life. Read Shelby Foote’s Shiloh, then visit the Shiloh National Military Park in April. Sit under a tree near the Tennessee River in a cold rain and try to sleep there all night in the mud, imagining that at dawn, men with guns will try to kill you. Then ask yourself, Why did our nation even fight this war? What compelled men, most of whom never owned a slave, to do such things?

Third, what are the names of your three closest African-American friends with whom you have had an honest discussion about Confederate monuments? This, of course, is a question for my white Southern friends. We are all drawn to our echo chambers and we can all take out of Ken Burns’ documentaries what we want. But try to see this war, and these men memorialized in granite and bronze, through someone else’s eyes. Try to understand it. Try to feel it.

Like many Southerners who love the South, I once owned a Confederate flag. Years ago, my son hoisted it from a tower in our backyard and we never intended to communicate anything but provincial affection. But I decided to ask a black friend of mine at the gym what he thought about it. He carefully hesitated, as black men navigating Southern culture often do, and softly told me, “It brings back bad memories.” I took it down forever.

And here’s where reading books can help. When you read books, you know stuff. And I was persuaded that General Lee would not want me to fly that flag. He surrendered that flag at Appomattox. Anyone who has read Foote’s account knows that the only flag that Lee and his army were allowed to take home was solid white.

And speaking of what General Lee would want, we know what he thought about Confederate monuments in the years following the war. In 1869, Lee wrote in a letter that Civil War monuments in general were not in the best interest of a wounded and divided nation in need of healing, since they would serve to “keep open the sores of war.” Three years earlier, Lee advised against the erection of a monument in honor of Thomas “Stonewall” Jackson, “in view of the present condition of the country.” Following Lee’s advice, I also think it is wise for us to consider the present condition of the country as we debate this issue.

But now that we have them, what shall we do about Confederate monuments? Most of the responses fall into four main options.

Option 1: We can do nothing and hope this whole thing just blows over. We can hope that Neo-Nazis and Klan members don’t make these monuments a hill to die (or kill) on. We can double down and demand our rights and expect our offended fellow citizens to just get over it. But what clues are there to indicate that they will just get over it? Is that really the trajectory of this national discourse?

Option 2: We can destroy them. Face it, fellow Southerners, some of these monuments are cheesy and weird. But some of them really are splendid works of art. I suppose it is possible to cleanse our national public landscape of every visual reminder of the confederacy. But where will this end? Whose statue will be next? And who gets to decide which monuments go and which remain? All of our heroes have flaws, and it is a symptom of “chronological snobbery,” a phrase coined by C.S. Lewis, to think that if we had been in their place, we would have acted more nobly. The boldest claims are made by those armed with hindsight. Every statue in America memorializes a human being made in the image of God, but fallen and morally flawed.

Option 3: We can remove them from public places and preserve them in museums and designated spaces, like battlefields, where people who want to see them can choose to see them. They are, after all, part of our history and they help us tell our story to the next generation. But how likely is it that parents will take their children to battlefields and museums these days? Most Americans don’t know much American history as it is. Will this only facilitate the dumbing down of America?

Option 4: We can leave them where they are and add to their number. A park with a statue of Robert E. Lee at one end and Stonewall Jackson at the other really doesn’t tell the whole story. We could add some other voices. We could commission some statues of Frederick Douglass, Harriett Tubman, Booker T. Washington, or any of The United States Colored Troops. I have never seen a statue of Dred Scott, but here in Alabama, I think we need a few.

I do not know if or how this will finally be resolved. I personally favor Option 4. But I’m sure I can be persuaded by better ideas. There may be an Option 5 I haven’t thought of. Do you have any good books you want me to read?

Steve Bateman has been the Senior Pastor of First Bible Church, a multi-site church in Decatur and Madison, Alabama, since 1992.